ANNOUNCEMENT OF EVENTS: Promotion programs of digitization of cultural heritage

Under the sponsorship and funding by Ministry of Trade, Tourism and Telecommunications Republic of Serbia, in the organization of Yugoslav Film Archive and Centre for Development of archival technology „CERAT“, implemented the first phase of the program: The digitization of cultural heritage – Collections of newspaper clippings „Half a century of Yugoslav Film“ – hemeroteca of Yugoslav Film Library.

Hemeroteca represents a collection of newspaper clippings about the film, cinema and TV. In the first stage is selected 10,000 of the most important articles that will through a system of Yugoslav Film Archive, will be available to all visitors in electronic form.

By digitalization of hemeroteca has been moved to its original form protects against damage, destruction and loss, and for research on simpler, more comfortable and safer way, uses its electronic form.

Promotion of the program is scheduled for 10 March 2015 starting at 12.00 h, in multi hall on the second floor of the Yugoslav Film Archive building, 1 Uzun Mirkova St, Belgrade. 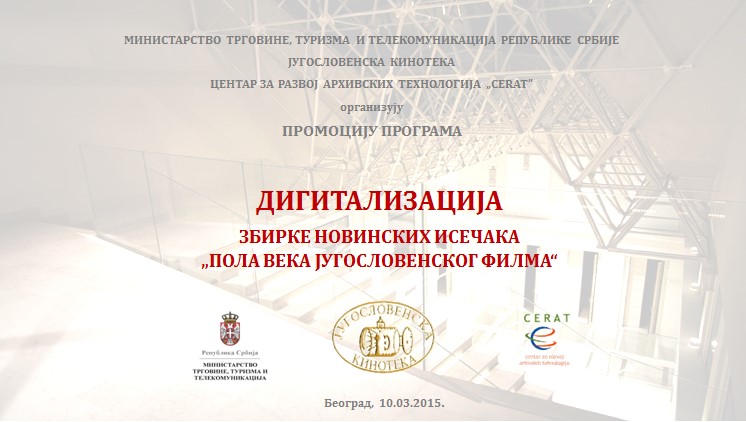